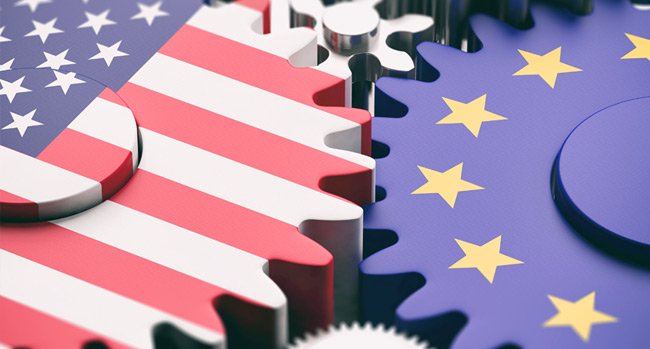 There has been a long-held belief that European B2B technology companies lacked the ambition, financial backing and/or access to public markets to truly compete with their American competitors.

For my own part I never felt this was entirely fair and the biggest single restriction faced by European organisations was the level of institutional funding available as they entered the scale-up phase. However, times have changed and now with far greater access to funds, the best European scale-up organisations are achieving significant success in the North American market.

Between 2015 and 2020 over $120Bn has been invested in European start-ups. Last year European start-ups raised over $36Bn and this has been tracking year-on-year growth at 25%. This is against a backdrop in a decline of overall global venture investment, particularly driven by a slow down of late stage funding in China.

The seismic shift in the European technology landscape is the number of later stage venture deals now being completed, this is now up by 16% year-over-year. Whilst last year venture money was deployed in over 48 countries, the lion's share is still being deployed amongst the Big 3 - United Kingdom (40%), Germany (18%) and France (12%), who between them still make up three quarters of all fundraising.

Recently we have been fortunate to work with a leading company from each of the three core markets on their US expansion activities. These searches have been for CRO, CMO and an Independent Board Member. The common thread across these three mandates is customer acquisition and revenue development.

Should you be considering US market insertion or expansion activities in the near future, for your own or portfolio company, I'd be happy to discuss matters further.

Eigen Technologies appointed Tony Ehrens as CRO to be based in their New York office. He joins Eigen from robotic automation process business Kryon Systems, where he was General Manager and VP Sales, Americas. Previously he was SVP Global Sales for smart process automation SaaS platform WorkFusion and SVP Sales at Sitrion.

Founded in 2014 and headquartered in London, Eigen Technologies has produced an AI driven platform that automates the extraction and classification of information from documents. Whilst there are several competitors addressing this market, Eigen’s key differentiator is that once installed the machine learning engine can be enhanced at the user level rather than requiring highly expensive Consultants and Engineers to maximise its capabilities. This of course leads to a significant reduction in cost and therefore a far more rapid ROI for the end user.

In November 2019 Eigen Technologies closed its Series B funding of $37M with an exceptional syndicate that included Goldman Sachs, Temasek Holdings, Lakestar and Dawn Capital.

TIS have appointed Chris Calhoun as a Non-Executive Board Member, specifically tasked with working alongside the CEO and leadership team on their North American market expansion. Chris has over 25 years’ executive management experience as CEO, Board Director and Angel Investor in the FinTech vertical. This appointment comes at a time where TIS has gained significant traction in the DACH region and broader European market. For example over 25% of the companies listed on DAX are already TIS customers. As a result of this success the next obvious expansion opportunity is the USA.

Headquartered in Walldorf, Germany TIS is a global leader in managing corporate payments. In 2019 the Financial Times named it one of “Europe’s fastest growing companies”. TIS has raised over $40M from top tier investors including Target Partners, 83North, Zobito and Aquiline Technology Growth.

Mirakl have appointed Joe Sawyer as their new CMO to be based in Boston. Joe’s eCommerce career started 20 years ago as an eCommerce Analyst with Forrester. This was followed by marketing leadership roles at SAP, Amwell and ReliaQuest.

Headquartered in Paris, Mirakl enables businesses across industries and geographies to launch and scale their own B2B and/or B2C marketplaces. Prior to 2020 Mirakl had been achieving significant success, attracting three funding rounds, including a Series C of $70M led by Bain Ventures alongside 83 North, Felix Capital and Elaia. However, the current pandemic has further accelerated the eCommerce segment with marketplaces now a pre-requisite for many businesses to survive.

As a result of this Mirakl’s revenues have grown dramatically to well over 100% year-on-year and in September 2020 they closed France’s largest ever B2B technology growth round of $300M led by Permira.

Sign up to receive our regular updates and newsletters, and see more of what we've been working on.